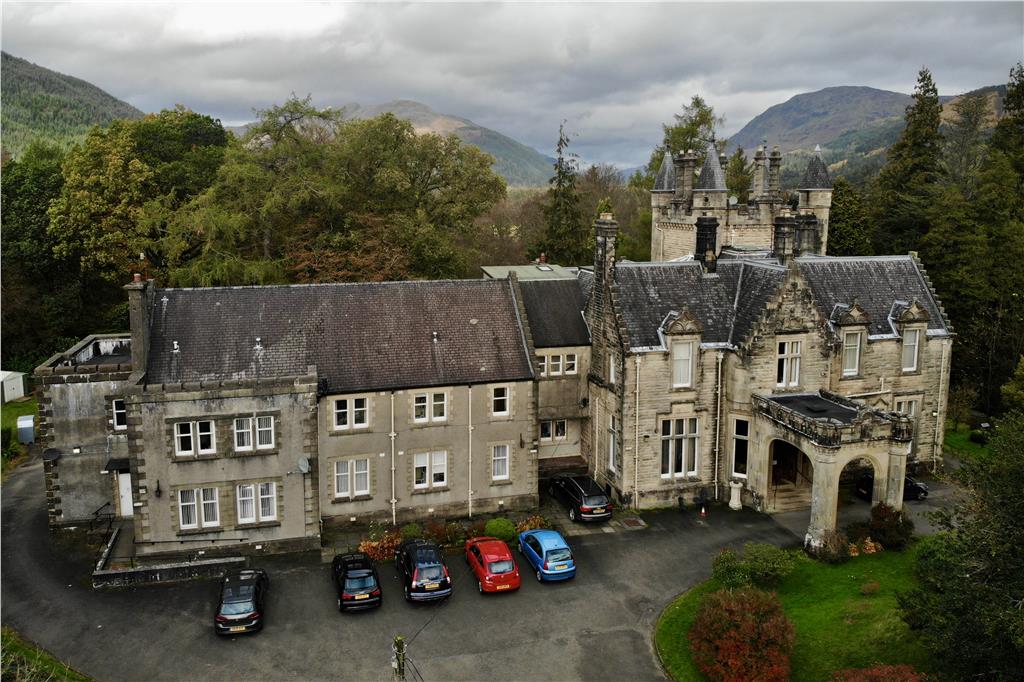 Baronial home for sale within Argyll

Invereck is a small Baronial country house dating from the late 19th century by James Thomson. It has prominent features such as a large tower, and the interior is of exceptional quality. It has been extended in recent times with a long crowstepped building to the south west over two storeys and offers excellent conversion opportuntities. Options include returning the property to a private residence, conversion to a small hotel or continued use as a care home or retreat.

It is believed the main house dates from 1886 as stated on the main tower. The house combines a rectangular-plan 4-bay front block, with a prominent crowstepped gable and a porte-cochère with round-arched openings. The main dining room faces the SE, with mullioned and transomed windows. The OS map of c1898 shows a large conservatory in the SW corner which has been removed.

The interior contains a number of quality features and the rooms are well proportioned. Access is via timber double doors in a timber entrance screen which opens onto the entrance hall, with a geometrically-panelled plaster ceiling and marble columns with gilded capitals. To the right, the main reception room has a timber dado and decorative marble fireplace. A second room has oak panelling and an elaborately-carved timber fireplace. Further to the rear is an intact butler's pantry.

The main stair is a key feature and has heavy turned balusters and gilt newel lamps behind which sits an impressive stained glass window, with a pedimented Minerva above figures of Music, Industry and Painting. The upstairs landing is lit by a painted glass dome. Throughout the house original joinery and plasterwork is intact.

It is thought Invereck stood in quite formal grounds due to the influence of William Jackson Hooker, the botanist and keeper at Kew gardens who owned the house for a time.

There are 6 cottages within the grounds which remain in reasonable condition. The gatehouse is not included in the sale and is within separate ownership.

The grounds extend to 11 acres with a good proportion following the River Eck.

Arrange a Call Back

We pride ourselves on being a market leader and have been recognised for our achievements by the property industry.

OUR INSIGHTS
YOUR INBOX

@RydenNews: Coming soon! ONYX is an exciting #refurbishment by CEG that will offer 57,000 sq ft of contemporary #office accommo… https://t.co/3p6xwx8LpM